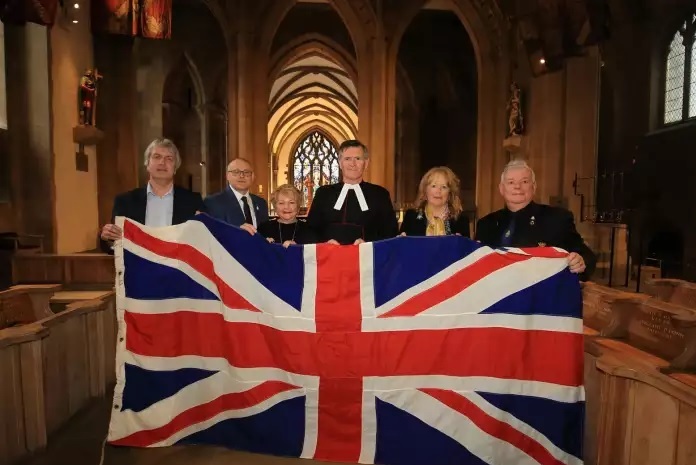 The following article is extracted from The Sheffield Star, dated Thursday 18 October 2018.

A Sheffield businessman has stepped in to ensure a Union Jack that once flew on the doomed British warship HMS Sheffield, will take pride of place in the ship’s spiritual home. Kevan Shaw, from Castle Square Corporate Finance, donated £3,275 to the HMS Sheffield Association appeal to display the flag in the city’s cathedral.

The appeal which was launched in May 2018, had reached £1,750 out of a target of £5,000 in just a few months, but Kevan’s firm decided to give the rest themselves. Their generosity means the flag should be in place in time for the next time the association marks the sinking of the last HMS Sheffield in May next year. Kevan said, “I remember the Falklands War from when I was 16 or 17. I was living and breathing the news as it happened. I recall the patriotism of the task force setting sail and to this day I can recall where I was when the news broke the Sheffield had been hit. I just thought it would mean something for people to have something visible from the ship at the cathedral.”

Mr Shaw said the idea for the flag came about after he saw a report about the fundraising appeal in The Star and got in touch with the association. They say it will cost around £5,000 for the Flagstaff and its metal housing to be designed and made by a specialist architect.

Tanzy Lee, from the HMS Sheffield Association, made a comment that while this flag didn’t go down with HMS Sheffield, it still provided an important link to the lost ship. He said, “When the D80 went down, there was no time to grab anything let alone the flag. So, there is nothing on this earth other than the ship at the bottom of the sea that people can go and see – that is the key to all this. But, it is also another contact we have made in the city of Sheffield. Because of the growing links between the city and the association, all of our future reunions are going to take place in Sheffield from now on.”

Last year, the flag was repatriated to the cathedral after spending almost 40 years in the United States.